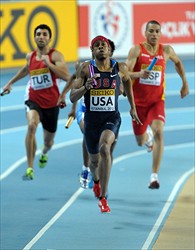 What motivates me to be great is when someone tells me I CAN’T do something that I KNOW I’m capable of doing because I believe in myself and strive to prove them wrong.

I always had the goal in life to be someone that other people could look up to.

I am Frankie Wright aka Yankdoodles aka Yank Wright aka Doodles. The older guys on my AAU team gave me that name when I was 10 years old; I’m not sure why but it stuck. Growing up I have seen a lot of drug deals and murders right before my eyes on Edmondson Avenue. I was a young kid who all the drug dealers saw had potential so they would look out for me and make sure I wasn’t hanging in the wrong crowds. Track and field kept me off the streets and away from dangerous situations while growing up. My best days of track and field was competing at the AAU and USA Championships from age 8-18 years old. Just being on a team with my neighborhood friends was always comedic and great times that I will cherish forever. We were all a bunch of competitive knuckleheads who had the mindset of being great.

In high school, I was known as a jumper and I had a lot of success in triple and long jump. I never thought about going to college because only a few people in my family had attended. It was actually my track coach who encouraged me to apply. So I did and received a scholarship to Barton County Community College. The track team was just like a family there and I flourished in that environment. I also earned a spot on the 4×4 relay after I beat the entire team in a 300m time trial. After I received my Associates in 2006, I went on to The University of Oklahoma to complete my bachelors. The team environment was cliquish and I struggled to adjust my first year (3rd year towards my degree) both on the track and in school. However, my second year (last year towards my degree) the environment changed and it became like a family. Because of that, my track and school performances improved greatly. I made it to the NCAA National Championship for the first time and in 4 events (Long jump, 400, 4×1, and 4×4)! Our 4×1 went on to place 4th!

After I graduated in 2008, I pretty much gave up on my track dreams. It wasn’t until 2011 while on vacation that the thought occurred to try to run again. Throughout my career, I always ran fast splits on the 4×4 relay and I never trained for the 400 only the jumps, so I decided to see what my potential would be in the 400 event if I actually trained for it. I talked to a coach who was training a small group of guys and started up again. By the 2012 season, I was the only one left in the group and went on to make the 2012 USA Indoor World Championship 4×4 relay team. After a great indoor season, I was looking forward to the possibilities of the outdoor season and the Olympics. During my outdoor season opener, I had an Achilles rupture and I had to end my season before it began because I had to have surgery.

Watching the 2012 USA Olympic Team Trials was one of the toughest moments for me, knowing that I should have been there and could have possibly made the team. I was devastated and I wasn’t sure if I was going to continue to run track but after a talk with a stranger at the airport I was motivated to keep pushing. After I recovered from surgery, I was put in contact with “World Athletic Center” now “Altis.” We talked for a while about me training with them and it was an offer I couldn’t pass up. So, I quit my job and immediately left Oklahoma to get back on the track. I am proud to say that I am one of the original Altis athletes. The next few years, I continued to struggle with various injuries but this year, I am happy to say I am injury free and ready to do great things! I always had the goal in life to be someone that other people could look up to. I love track because no matter what is going on in my life it allows me to be just that.

It was a great feeling when they put the gold medal around my neck, all I could think about was getting home to show my family and friends the gold medal and what I achieved with their support!

I have had a few monumental moments in my track career but winning a World Gold medal is definitely the most monumental because I was able to represent my country and perform in front of the world. When I was little I always imagined myself making a USA team and holding the United States flag over my head. My grandmother always told me that she could see me making it and I was proud to have done just that. It was a great feeling when they put the gold medal around my neck, all I could think about was getting home to show my family and friends the gold medal and what I achieved with their support!

To be honest I’m not really too focused on the Olympic Games. I’m just focused on executing my skills at every training session and competing at my best at every track meet I attend. It’s been very tough for me these past few years dealing with injuries. Altis has been very great by continuing to stick by me and helping me grow as a better athlete.

How is training going so far?

Training has been going great and I appreciate the prayers from my friends and family. This year my coach decided to give me more volume workouts similar to the ones I was doing when I made the Indoor World team. We figured out that I was getting injured more when I did a lot of speed endurance. Now that we have more volume, I feel really great and have been able to stay healthy.

Being successful to me is something that never ends because when I achieve something in life I  continue to challenge myself to the next level.

What motivates me to be great is when someone tells me I CAN’T do something that I KNOW I’m capable of doing because I believe in myself and strive to prove them wrong. My advice to the young athletes is to always believe in yourself because if you start listening to negative people who tell you that you can’t do the unthinkable, you will lose confidence within yourself. Always think outside the box and stay humble.

My advice to anyone who wants to get into shape and keep a healthy lifestyle is to make sure to stay consistent. Never cheat yourself because it would defeat the entire purpose of you trying to accomplish your goal. If you want to lose 30lbs. Lose it and grind until you accomplish it BUT don’t make something like that the end goal. Being successful to me is something that never ends because when I achieve something in life I continue to challenge myself to the next level and so should you!

Thank you for Reading and Please check out our next Feature Friday Next Friday with Ese Okoro!!!