So I have been getting a lot of questions on how professional athletes make the Olympic Team. So I decided to do a blog dedicated to what it will take for me to make the 2016 Olympic Team! I will go over the Olympic entry standards, the U.S. Olympic Trials, and what I have to do to make the team. Don’t worry, I still have advice for young athletes and workout tips. 🙂

The Olympic standard (or time) that has to be met to participate in the 400 hurdles is 56.20, this time needs to be run within roughly one year of the Olympics. My personal best is 56.15 so I have run below the Olympic standard which is great. However, for the USA running the entry standard is rarely the challenge. Depending on the country the athlete represents determines how the marks affect them. Some countries do not have enough athletes that meet the standard so they have the opportunity to receive an automatic bid (automatic entry) if they meet the Olympic entry standard. Unfortunately, this is not the case for the USA. The USA is one of the most competitive countries, so in order to make the team. You have to go through the USA Olympic Trials.

July 1- 10th, 2016 is the U.S. Olympic Team Trials in Eugene, Oregon, this is the make it or break it moment. The track meet above all track meets (besides the Olympics of course), the meet that determines who will be on the Olympic team. So how does an athlete get there?

First an athlete has to qualify for the U.S. Olympic Team Trials, the qualifying time has not been posted yet but we can assume it will be around 56.89 (the qualifying standard from last year’s U.S. National Championships) but typically it is slower than the Olympic standard. This standard has to be obtained at any meet that is sanctioned by the IAAF (International Association of Athletic Federations) guidelines.

So once an athlete qualifies for the U.S. Trials, they have to place top 3 in their respective event AND have the Olympic Standard. Yep, there are only 3 spots per event! There is an exception for the 100 and 400. In these events the top 8 finishers are entered into a relay pool for the 4×1 and 4×4 relays. Only 6 people can compete in the relay events. Typically, a country will have 2 people only compete in the qualifying relay round in order to save their 2 strongest legs for the relay final.

And that is how an athlete makes the Olympic Team!

So, I know you are probably wondering what will it take for me to make the team!

There have been countless examples of 400 hurdlers dropping 2 or more seconds in a single year and through my experiences I have the knowledge of what I need in order to do so. I’m in an amazing environment with great coaches and I am prepared to make this team! While to make the team I probably need to run mid- 54 seconds, my goal is 53.78.

Because I know I am more than a 54 second hurdler and I don’t want to barely get on the team. MOST IMPORTANTLY, I don’t just want to MAKE the team, I want to MEDAL at the Olympics and in order to do that I’m going to have to break 54 seconds, maybe even 53 seconds!!

I have a list of goals and what it will take in order for me to reach them. I know what mistakes and weaknesses, I have had in the past and how to get through them. I have a master plan, that only needs to be executed. 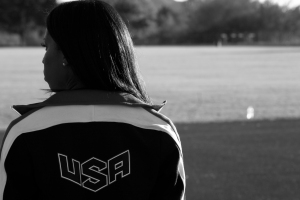 Map out your goals. It is not good enough to have a time goal or a competition goal (i.e. make it to Regionals, make it to Nationals), you have to know how you are going to get there. Have a meeting with your coach and figure out a road map to your success, what you are lacking, what your strengths are, and what are realistic goals for you. Study yourself as an athlete, your event (or sport), and your event leaders.

Here is a sample of things you should ask yourself. What kind of athlete are you (Sprint based, strength based, endurance based)? What kind of workouts make you better? What are the main components to your event? What are those breakdowns (split times, charts, form)? Who are the current event leaders? Who are the all-time leaders? What made them all great? Commonalities? Differences? Which ones closely resemble your style?